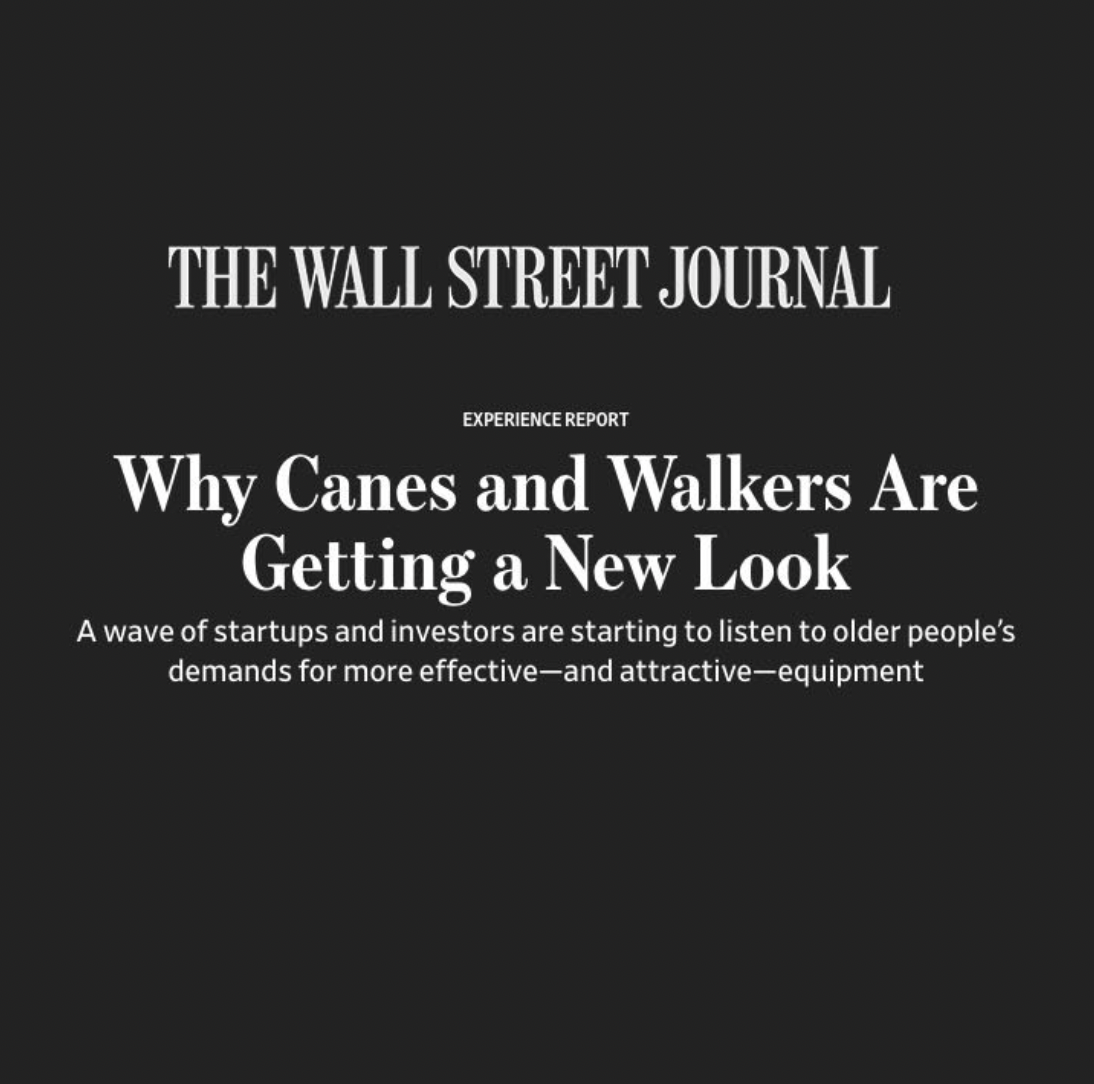 After many years of outdated mobility aids, design companies are finally listening and changing the industry. In this article by The Wall Street Journal, they dig into the reason behind the change – and we’re proud to be part of it:
Why canes and walkers are getting a new look

Older people have long complained that products designed for them are clunky and unattractive.

Now investors and inventors are starting to listen to their complaints.

As the population of people aged 65 and over grows, so does their spending power in the marketplace – and designers are taking notice. More companies are offering walkers, canes and other products that deftly assist the elderly – and are stylish at the same time. And investors are helping more of these businesses get to market.

The boomer generation is the first to wield its considerable spending power to reject bad design, says Patricia Moore, an industrial designer. As a 20-something-year-old in the 1970s, Dr Moore disguised herself for a year as an octogenarian to fully understand how design fails older people.

“We were the ones always fighting for social change and looking good doing it,” says the designer, now 67 years old. “Now the medical model of ageing doesn’t suit us, and we’re using consumer choice to drive the change.”

Products such as walkers and canes have been slow to evolve aesthetically over the past century, as designers focused largely on products for their young, mobile peers and largely ignored the desires of the elderly, says Chris McGinley, a senior research fellow at the Helen Hamlyn Centre for Design at London’s Royal College of Art.

But, Dr McGinley says a shift in the way design thinking is taught in schools – as well as the slow death of the “superstar, egocentric designer” – has meant the needs and desires of older people are now being considered by those who develop products for them.

“Research-and-design ethnography methods that teach people to understand the end user experience seemed quite niche 10 or so years ago; now, they’re a part of most good design courses,” Dr McGinley says.

When designers ask older people what they want from products, the answer is often simple: something which does not look like something a frail, doddery person would use, says Don Norman, a former Apple designer. Now 84 years old, he believes designers too often equate age with poverty.

“Don’t we all find more attractive furniture or clothing and pay a bit more for it throughout our lives?” he says. “Why should it be different for this time in life?”

The request for a cool-looking walker or a well-designed long-term-care facility goes deeper than vanity, says Charlotte Yeh, chief medical officer of AARP, who used a cane herself for a number of years after a car accident in 2011.

“We have to address the damaging imagery of ageing: Old-fashioned mobility and medical devices can turn you into an object of pity,” Dr Yeh says. “When you bring a sense of design and beauty and aesthetics to them, people will talk about them, and people will talk to you – it becomes a way to connect.”

This group has power in numbers: In 2018, there were 52 million Americans over the age of 65, a figure that will nearly double to 95 million by 2060, according to the Census Bureau. And Boston Consulting Group projects that Americans over age 55 will account for half of all domestic consumer spending growth from 2008 to 2030.

Yet Ipsos research found that 82% of those over age 55 say their favourite retail brand no longer understands them or what they need. This feeling of alienation – plus a rise in internet literacy among pensioners – is pushing the demographic to seek out and spend their money with brands that cater to their aesthetic needs, says Brian McMahon, founder of design research collective Segment International LLC.

“The idea that older folks are more brand loyal is an outdated view,” he says.

Many of the companies older adults are turning to have gotten into the niche fairly recently.

“Danish design house byACRE ApS, which made its retail debut in 2018, is producing carbon-based rollators – walkers with wheels – as a sleek and lightweight alternative to the heavy-duty aluminium offerings sold in mobility shops. The Danish company has sold roughly 12,000 units since its launch to customers in the US, Japan and Australia.

Founder and chief executive Anders Berggreen was previously chief executive of Seed, a studio that sold high-end pushchairs for babies. He began adapting his design skills for the pensioner market after someone at a design fair commented on the similarity between pushchairs and rollators.

Ten years ago, byACRE wouldn’t have existed, Mr Berggreen says. “Older people are using the internet more and googling ‘stylish rollator’ and finding us,” he says.

Another big change: “End users are primarily making the purchases,” he says. “Previously, it was children or caregivers who did the buying, and they simply chose whatever was on offer in mobility stores – which meant ease and good looks weren’t always prime considerations.”

Source: Wall Street Journal – Why Canes and Walkers are Getting a New Look – 1 August 2020