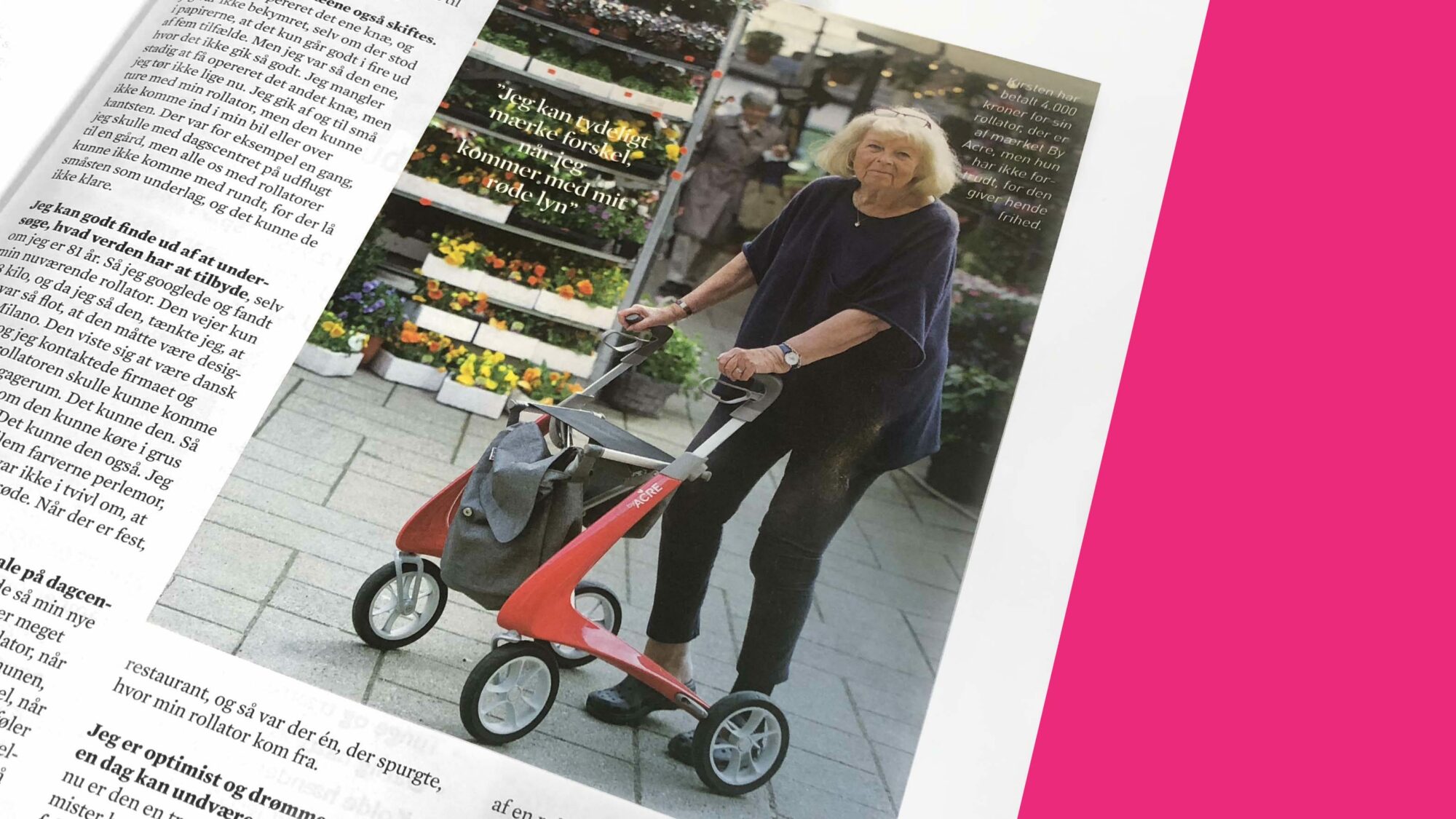 When byACRE met Kirsten
Kirsten was one of the first byACRE users in Denmark. In 2018, Kirsten was interviewed by both the Danish broadcasting station TV2, when they were doing a small feature on welfare technology and rollators, and for the Danish Magazine ‘Hendes Verden’ as part of a theme about assistive aids. Here, she shares some wise words about using a rollator.
After so much limelight, we figured it was time to share the story of how byACRE met Kirsten – and share some of Kirsten’s wise words.

Kirsten received her first rollator in 2007, when she had to do physio after an operation on her hip. “For a while, things were going great and my hips were working as they should”.  She therefore only used the rollator for physio purposes. As she put it herself, “it wasn’t a rollator made for a stroll along the promenade”. Last year she underwent another operation. This time it was her knee, and the operation did not work in Kirsten’s favour. She now needed the rollator for more than just physio.

The rollator Kirsten had received from the municipality did not meet her requirements*. She loves to explore and meet new people, and her rollator wasn’t really up for these adventures. She needed something lighter which did not cause pain in her hands on longer walks and which would fit in her car.

“Fortunately, I can figure out what the world has to offer even though I’m 81 years old. So, I Googled and found my new rollator.”

After a Google search, she found byACRE, called us, and paid us a visit. She quickly decided on the Carbon Ultralight in Strawberry Red. Because “Why not red? Let it be red so that it can be seen.” Kirsten calls her rollator “The Red Lightning” and has actually said that she enjoys walking with the rollator more than walking her dog. With her rollator, she decides for herself when she wants to walk, but she gets the same attention as she would walking her dog.

Even though Kirsten loves her rollator, she still dreams of being able to walk without it. But right now, the rollator gives her peace of mind knowing that she won’t lose her balance. “When you’ve experienced falling and hurting yourself seriously, you are not sorry about your rollator. I am so happy to have it. It gives me freedom instead of longing.”

Kirsten is only one of many byACRE users around the world, but her story is far from unique. For many people, ageing often leads to a need for more support while walking, and like Kirsten, when you get to that age, you still want to keep up the life you’re used to. Ageing does not entail a sudden stop in one’s need for adventure and social interaction. And it most certainly doesn’t entail a wish to be portrayed and treated any differently. Because “Age is the new black”.