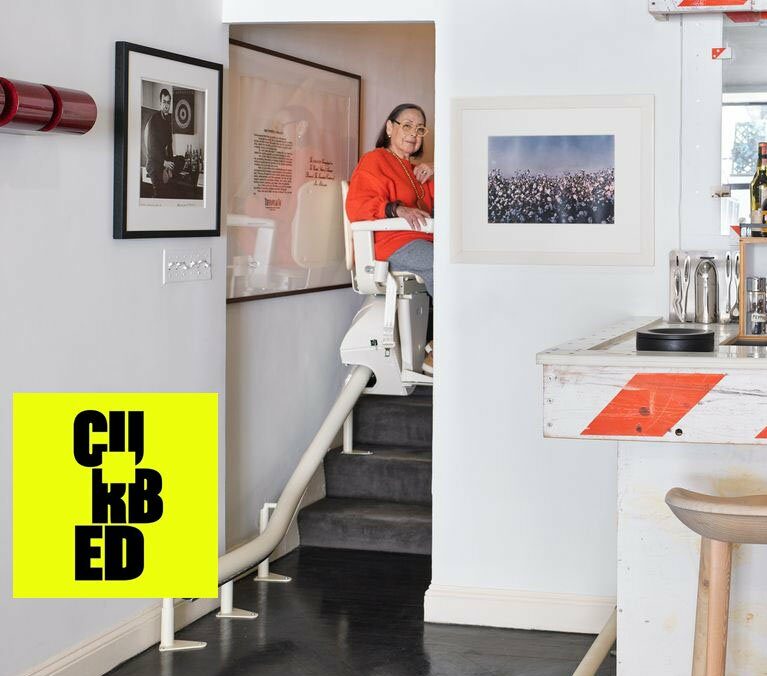 Art Collector Barbara Jakobson has lived over 56 years in her vertical, yet inspiring home on Manhattan. How does she do it? She lets her house change along with her life – including welcoming her Carbon Ultralight Rollator. In this article by Curbed we get an insight of a creative living:
“I keep the transformation as proof of life.”

This house has a great history,” says Barbara Jakobson, much of which she made herself. She is 88 and has lived here since 1965, filling all five stories with her collection of paintings, sculpture, photography, and furniture. And the last thing she wanted to do was leave it. But a townhouse means a vertical life, and “after 56 years of stair-climbing without major incident, I was hurrying down from the top floor to the one below at about 5:30 p.m. on Friday, October 23, tripped, and as I crashed to the landing below, I cursed my fate,” she says. Her tumble broke her leg, but, she says gleefully, “I did not hit my head!”

She immediately realized she needed to find a way to move between floors more safely. Probably one of those stairlifts, if she could find one she liked. The house could be adapted; it had always changed with her life as her collecting evolved. “I see the house as a vessel for an ongoing autobiographical exercise,” she says. “I keep the transformation as proof of life.”

They raised three children there. Barbara, who grew up across the street from the Brooklyn Museum and spent many hours in its galleries, had studied art and architectural history at Smith and, as an adult, began collecting art and got to know influential dealers, including Sidney Janis, Ileana Sonnabend, and Leo Castelli. She also had an interest in architecture, encouraged by MoMA curator Emilio Ambasz, and after becoming head of the Junior Council at the Museum of Modern Art in 1971, she organized a show of architectural drawings that included works by Peter Eisenman, Raimund Abraham, and Gaetano Pesce and became a trustee of MoMA in 1974.

Her many friendships are visible in these rooms: She and Robert Mapplethorpe were close, and she sat for many portraits by him. The Robert Morris felt piece in the foyer she bought in 1970; “Bob was a great pal. I really knew him until the end of his life.” She helped Sachs get his first job out of college, working with her when she was consulting for Knoll, doing the plywood furniture with Frank Gehry, “which I got Frank to do.”

The Sitting Room: Jakobson’s new carbon-fiber walker mingles with totems of her life and interests. The portrait of Jakobson above the fireplace, one of many taken by Robert Mapplethorpe during their long friendship, is flanked with photographs by Matthew Barney. Richard Artschwager designed the chair in front of the fireplace. “I just thought it was so witty,” she says of the rubber vase with weeds by the Campana brothers in the middle of the room. The Lolita rug is by Barbara Bloom. The view is over the double-height room with the ghost Stella.

While recuperating from her fall, she looked into the right chairlift, one that might keep her in her house. She has always been fascinated by chairs. The first research paper she ever did, at age 13, was on the history of the chair. Why the chair? “Well, you know, the chair is the substitute for the human body. The chair is the only piece of furniture that relates to a single human being. So from the time you get in your high chair to the time you get in your wheelchair” — here, she laughs — “you’re dealing with chairs. And that’s why, I mean, in a way, that’s why the stair-climber, when I found it, I realized, Oh my God, it’s a chair; it’s going to save my life.”