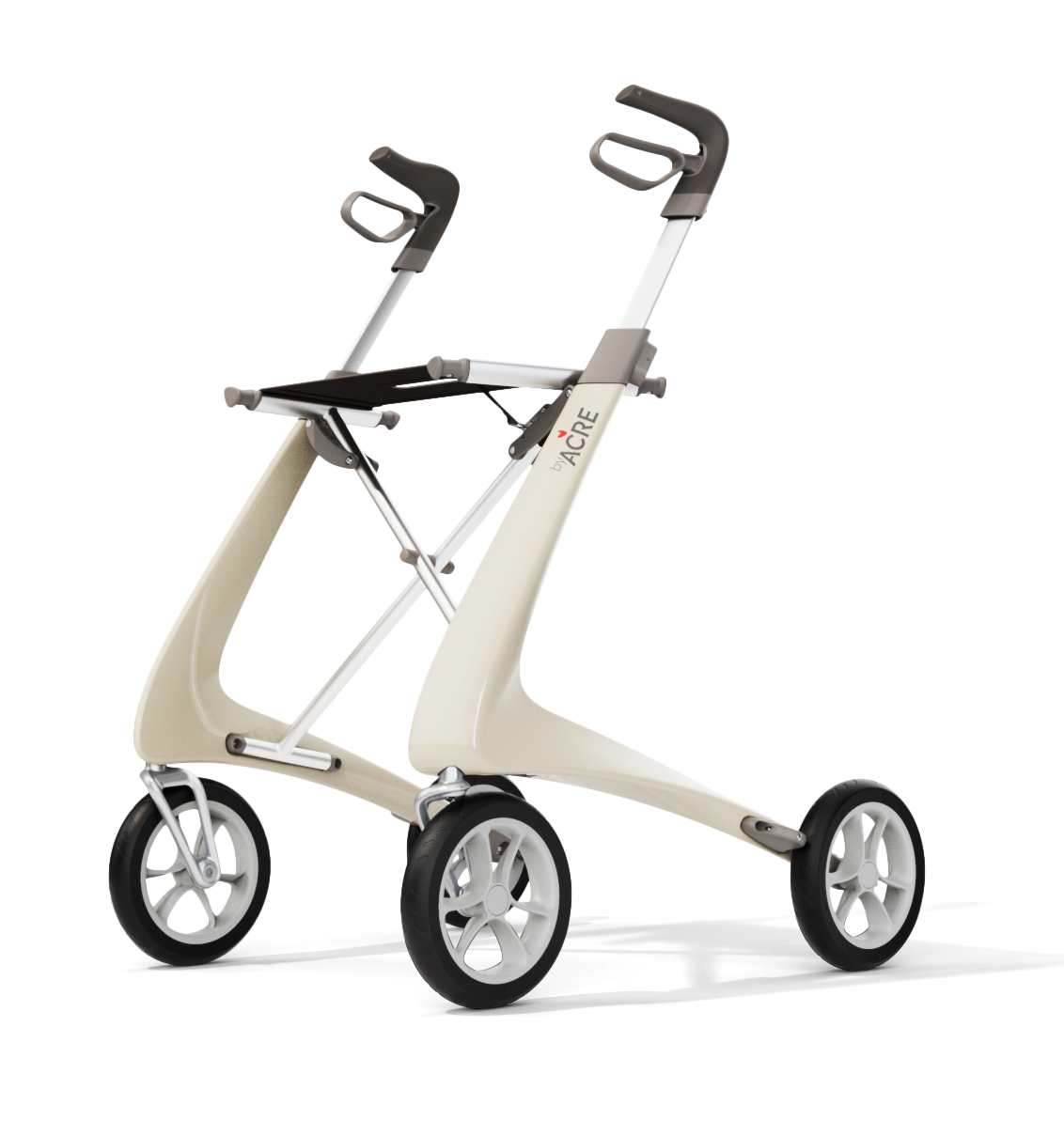 As part of the article “Universal Design Targets Products for All Ages” for Plastics Engineering, journalist Robert Grace has interviewed our CEO and founder, Anders Berggreen about byACRE’s design philosophy:

In 2004, byACRE’s Berggreen founded a firm called Seed, which sold premium baby strollers and pushchairs that he designed. He recalls: “Years ago, I was asked, ‘Would you not like to design a rollator?’ (a wheeled walker) And I said, yes, you are absolutely right, I would not like to design a rollator. Because I thought it was so unsexy and, for me, boring. I really was not interested in doing that.

“But after I said ‘no’ to that, I started seeing rollators everywhere. They looked to me like something manufactured in East Germany in the 1950s and ’60s. They were just so boring.”

Then Berggreen got to thinking of the importance of applying design to help those who were challenged in their mobility, not necessarily just older people. He read a study about people who needed such devices, and how they were lacking. He realized that those users tended to feel sick and embarrassed and their level of social activity declined almost to nothing.

So, after selling Seed and then founding byACRE in 2015, he said: “We made a design brief for ourselves: Can we make a rollator that looks like furniture?” He pondered how to take some of the references of classic Scandinavian design and incorporate them into such a product. The firm’s first rollator earned a prestigious design award.

Another important element of the mindset, he stresses, is that byACRE does not view its product users as “patients,” but rather as “customers.” They might be challenged in their mobility, but that doesn’t mean you are a patient. “There’s a very, very big difference,” he says, “between talking to a patient and talking to a consumer.”

Berggreen sees no reason why assistive devices such as rollators can’t be functional and stylish.

Consumers have free choice. They make their own decisions about what they like and don’t like. So byACRE aimed to create a rollator that someone would like to walk with. It wasn’t something that the user just got from an insurance company or from the healthcare system.

Berggreen says the response to early models was positive. He received letters from family members of those using byACRE’s rollators saying that the user had resumed a social life again. It is no accident that byACRE’s very name was assembled from the words “active” and “rehabitare”—Latin for “back to life.”

All About Losing Weight
While gathering this user experience, the byACRE team learned that the weight of the product was important to those customers. But, he says, manufacturers paid little attention to product weight. Most rollators then were made in China, for European and U.S. companies, “and nobody really cared about designing for this target group.”

The firm next turned its attention to finding how to produce a stylish yet lightweight frame. That led them to explore carbon fiber and resulted in its latest product—the Carbon Ultralight. Berggreen outlines the labor‐intensive, low‐pressure manufacturing process that byACRE uses to make its products in‐house, via operations in China, Myanmar, Sweden and Denmark.

First, there is carbon cutting. In this process, small prepreg sheets of the Japanese‐sourced carbon fiber are cut out and combined. This resembles a form of knitting or weaving, where the strands are woven in different directions. He says byACRE uses its “own special recipe” for this process, to yield a strong, lightweight frame. “This is the heart and soul of the Carbon Ultralight walking experience.”

Once the sheets are cut and woven, they are layered to create the special “boomerang” shape of the rollator frame. “Our frames consist of around three large pieces that are combined in different directions to form the unique shape.” Inside these overlapping sheets they insert silicone bladders to help the frames keep their shape during the next step, which is the baking process.

The construction is then placed inside a custom‐made mold, which is heated to 180°C and baked. The bladders inside are inflated incrementally to keep pressure and ensure that the shape holds. Once out of oven, the frames are fitted with cuttings and drillings done by hand at the top of the frame where clips and the handlebar are attached.

Once done, the frame parts are sent for painting. They first must be sanded by hand before being coated with layers of byACRE’s Oyster White, Carbon Black or Strawberry Red color paint. The frames are finished with a clear coating and a good polish, and after a careful inspection are sent off to be assembled.

It’s obvious, Berggreen notes, there is a lot of work involved in creating a Carbon Ultralight rollator. “Making the carbon fiber frames is only a small part of the entire production process, but it is very much in this step that the DNA of the rollator lies.”

The Carbon Ultralight model sells for between $600 and $650 in the U.S., and weighs just 10.5 pounds. While initially skeptical as to whether the product would be well received in the U.S. beyond a few major cities, he says byACRE has already sold the model in 48 states, as well as across Europe, and in South Korea, Japan, Australia and New Zealand.

Next: A ‘Masculine’ Model
Now, the firm is developing a Carbon Overland model that was due to launch about the time of this publication. It will have a “very masculine” look and feature bigger, air‐filled wheels that can be used to navigate through sand, mud and other off‐road surfaces. byACRE developed this model and partnered with Land Rover, to co‐promote it in conjunction with the automaker’s recently relaunched Defender sport utility vehicle.

When it comes to marketing, Berggreen explains, the messaging is vitally important. It’s a huge step mentally to go from using a cane to using a rollator. His approach is that “it’s a means of transportation much more than it’s a mobility aid, and I think that’s why it works.”

He doubts, frankly, that such a product could have succeeded a decade ago. But the internet has made a huge difference in buying patterns. Instead of doctors or caregivers going to medical equipment stores to buy the cheapest, sturdiest walker or rollator, now the user herself can research the product from home.

“With the internet,” he says, “people Google it and find information about these products. We can see on our website that people come and go and come back and take time to read our design philosophy. It gives them confidence. That would have been impossible 10 years ago.”

READ OTHER STORIES
explore our rollators